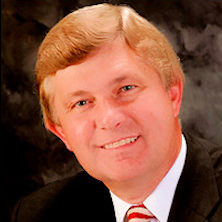 Mike grew up in the Circleville, Ohio, area and is a graduate of Logan Elm High School in 1973. Upon graduating from high school, Mike attended Ohio University Chillicothe, intending to be a coach and work with young people. In September 1973, while a student at Ohio University, Mike accepted Jesus as his savior during a revival service at Circleville First Church. It was then Mike began to believe God wanted him to attend Circleville Bible College. He enrolled began his studies at CBC in September 1974. As a student Mike traveled in the College Quartet and served as the Associate Pastor at Circleville First Church. At the winter revival in February of 1976 Mike was sanctified and later in that same revival he accepted his call to preach. He graduated from Circleville Bible College in 1978.

Mike spent a year in Duncanville, Texas, as Youth Pastor at Duncanville Evangelical Church. The following year Mike became the Director of Enrollment for Circleville Bible College. He served in that capacity for four years. He was ordained by the Churches of Christ in Christian Union in 1979. While serving as Director of Enrollment, Mike met Charla Condon, and they were married in September of 1983. Following their wedding Mike and Charla moved to Alma, Georgia, to pastor Evangelistic Temple. They pastored in Alma for three years. In 1986 Mike became the pastor of the Circleville First Church of Christ in Christian Union. One year later, he was asked to return to Circleville Bible College as the Vice President in Enrollment. Mike accepted that challenge and for the next four years was the Vice President in Enrollment.

In 1991 Mike was asked once again to be the Senior Pastor of Circleville First Church. He served a pastor for 16 years. Under his leadership the church grew, outgrowing their facilities. Property was purchased property for a new church campus.

Mike has served the CCCU in many ways over the years. Besides his time at OCU and pastorates, Mike was the General ECY President for six years. He has also served on many boards and committees on the District and General levels.

Mike and Charla have been married thirty one years and have committed their lives to serving the Lord and to building the Kingdom of God. They desire to bring glory to God in all that they do. They bring a heart for the Great Commandment, the Great Commission and serving the CCCU.